Home Health 1 Tbsp. of ACV for 60 Days can Eliminate These Common Health... 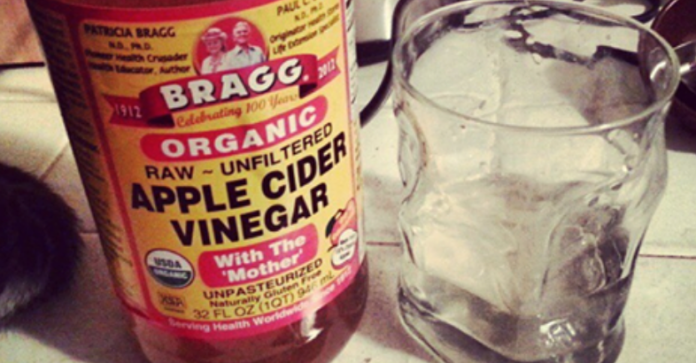 Vinegar is known to have been discovered around 5000 BC, when the not wanted grape juice has been made into wine and then vinegar. Originally used as a food preservative, vinegar’s medicinal uses soon came to light.

Hippocrates have been using vinegar in order to manage wounds, while medical practitioners in the 1700s used it to treat everything from poison ivy and croup to stomach aches. Vinegar was even used to treat diabetes.

Vinegar, which means “sour wine” in French, can be made from virtually any carbohydrate that can be fermented, including grapes, dates, coconut, potatoes, beets, and, of course, apples.

There are no official guidelines concerning taking vinegar internally. Some people take one to two teaspoons a day, mixed in a glass of water, before meals or in the morning, and report benefits from doing so. The risk of taking small amounts of vinegar is low, and research suggests it may have some real health benefits.

Vinegar is said to be anti-glycemic and has a beneficial effect on blood sugar levels. It’s thought that the acetic acid in vinegar may lower blood sugar by preventing the complete digestion of complex carbohydrates, which is accomplished either by accelerating gastric emptying or increasing the uptake of glucose by bodily tissues.

One theory is that vinegar might inactivate some of the digestive enzymes that break down carbohydrates into sugar, thus slowing the conversion of complex carbohydrate into sugar from a meal into your bloodstream.

This gives your body more time to pull sugar out of your blood, preventing your sugar levels from spiking.  Quite a bit of research supports the use of vinegar as a diabetic treatment as well.

One study found that vinegar treatment improved insulin sensitivity in 19 percent of individuals with type 2 diabetes and 34 percent of those with pre-diabetes.

Yet another study found taking two tablespoons of apple cider vinegar before bed lowered blood sugar levels in people with type 2 diabetes by up to 6 percent by the morning.

Vinegar supports heart health in multiple ways. As explained in the Journal of Food Science:

“Polyphenols such as chlorogenic acid, which is present in high levels in apple cider vinegar, could inhibit oxidation of LDLs and improve health by preventing cardiovascular diseases.”

One study showed that vinegar could lower cholesterol in laboratory rats,while another study on rats found their blood pressure could be lowered by the acetic acid in vinegar.

Vinegar has also been found to decrease triglyceride levels and VLDL levels (the damaging form of cholesterol) in animal studies.

Vinegar may help you lose weight, as it appears to have an anti-obesity effect by increasing satiety and reducing the total amount of food consumed.

For instance, when volunteers consumed a small amount of vinegar along with a high-carb meal (a bagel and juice) they consumed less food for the remainder of the day. The reduction equated to about 200 to 275 calories a day – an amount that would result in a monthly weight loss of up to 1.5 pounds.

In addition, separate research found taking vinegar along with bread not only lowered glucose and insulin responses, but also increased levels of satiety. The rating of satiety was directly related to the acetic acid level in the vinegar.

Apple cider vinegar helps to break up and reduce mucous in your body, helping to clear your sinuses. It also has antibacterial properties, making it useful for infections.

Apple cider vinegar works for a variety of skin ailments, from bug bites to poison ivy to sunburn. You can either apply it directly to the irritated area or try soaking in a bath with about one cup of vinegar added.

Topical application of apple cider vinegar can help with removal of warts, likely because of the high levels of acetic acid it contains. You can try soaking a cotton ball in vinegar and applying it to the wart, covered, overnight.

Apple cider vinegar is filled with potassium and enzymes to help banish fatigue. Plus, its amino acids may help prevent the buildup of lactic acid in your body, further preventing fatigue.