Home Health Looking Inside the Fish Industry: Why Farmed Salmon is One of the... 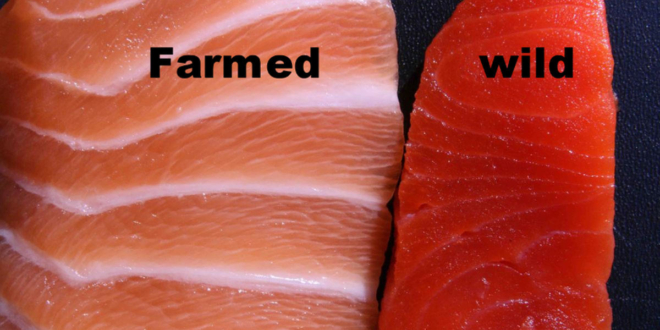 For a long time, fish has been touted as super food from doctors, as well as nutritionists and specialists from around the world. A lot of people choose not to eat meat or some other animal product but show pride in their presumed health-conscious decision to consume fish. But, as with almost every other thing that is promoted heavily in the media, there is something fishy about this.

There is no doubt that it contains a lot of essential omega 3’s which are better known to be good for our brain, many consider fish ‘brain food’ as of how essential these nutrients are for the health of our brain. Unluckily, farmed fish, especially salmon and tilapia are doing more harm than good, and as awareness grows, a lot of experts are now claiming for farmed fish to be one of the most toxic foods in the world.

A documentary from Nicolas Daniel named “Fillet-Oh-Fish” takes a critical look at the fish industry, featuring exclusive footage from fish farms and factories all over the world. A lot of people still have a rather romanticized view of fishing, but when it comes to large-scale food production, the picture is rather grim.

The fisheries of today are faced with a range of severe problems, from overfishing to chemical pollution and genetic mutation from toxic exposures. As it was noted by the producers of the film, through intensive farming, as well as global pollution, the flesh of the fish which we eat turned into a deadly chemical cocktail.

Despite that, the fish business is booming, because of the efforts to keep the dirty underbelly of modern fisheries from public sight.

Unluckily, Aquaculture often promotes itself as a sustainable solution to overfishing of the oceans in the world. The truth is that fish farms are causing more problems than they are solving and it looks like turning a profit is far more important to these corporations than actual sustainability or environmental concern.

Why is farmed salmon considered as one of the most toxic foods in the world?

The film which we already mentioned starts off in Norway, documenting the chemicals which are used in fish farms. Kurt Oddekalv, who is a respected Norwegian environmental activist, also believes that salmon farming is a disaster for human health and the environment too.

Below the salmon farms of the Norwegian fjords is a layer of waste which is 15 meters high and as you can guess, it is teeming with bacteria, as well as drugs and pesticides. As these farms operate in open water, the whole seafloor has been destroyed, and the pollution that is created by these farms is not contained. A salmon far can hold about 2 million fish in fairly small space and as a result of these crowded conditions disease among the fish is inevitable.

To stave off diseases, different pesticides are used, and there is no doubt that eating this fish means that you are also eating these pesticides.

One toxicologist, named Jerome Ruzzin, has confirmed some of the claims made by Oddekalv. Testing some different food groups sold in Norway for toxins, Ruzzin has discovered that farmed salmon contains the greatest amount of toxins of every other fish, and to an extremely large degree. Also, the farmed salmon was five times more toxic than any other food product which was tested.

In recent years, the evidence that diabetes was caused by a lot more than just sugar, specifically toxic chemicals, as well as air pollutants in the food that we are consuming is coming to light and this case, we have learned that salmon farmed in this manner is going to inevitably contain far more toxins than those in the wild.

So, what makes the fish feed so toxic?

As it was pointed out in the documentary, the most important source of toxic exposure to the fish is not the pesticides or antibiotics, but the regular dry pellet food. It contains a lot of other toxic chemicals which include dioxins and PCB’s. In one Norwegian fish pellet plant, the main ingredient turns out to be an eel, which is used for their high protein, as well as fat content, and some other fatty fish from the Baltic Sea.

That is where the problem starts, as the Baltic is highly polluted. Some of the fish that is used have toxic levels of pollutants, which then simply get incorporated into the feed pellets.

In Sweden, fishmongers are now required in order to warn patrons about the potential toxicity of Baltic fish. According to the recommendations of the government, you are not supposed to eat fatty fish like herring more than once in a week, and if you are pregnant, fish from Baltic should also be avoided.

The Swedish Greenpeace activist named Jan Isakson reveals some of the sources of all this pollution. He stated that just outside of Stockholm, there is a massive paper mill on the bank of the Baltic which generates toxic dioxins.

Additional nine industrialized countries surrounding the Baltic Sea also dump their toxic waste into this closed body of water. Dioxins bind to fat, which is the reason why herring, eel, as well as salmon are particularly vulnerable, and why they end up accumulating higher amounts than some other fish.

As a result of being deemed unfit for human consumption, some of these fatty fish are not primarily used as fish food. In that way, toxicity in the farmed salmon is permitted to build up even higher than in the wild.

A lot of panga farms are plagued with disease, courtesy of the polluted waters in which they are raised. Mekong River, where many panga farms are placed, is one of the most massively polluted rivers on the globe. In 2009, the World Wide Fund for Nature put panga on their “red” list of products which pose a danger to environmental, as well as human health.

Every day, millions of Vietnamese households dump their waste directly into the Mekong River. The pesticides which are used in rice cultivation also migrate into this waterway. Green algae, as well as bacteria, release toxins into the water and reduce oxygen levels in the water, which also adds further stress on the immunity of the fish, making them more prone to diseases.

It is quite obvious that fish farms are not a viable solution to overfishing. If anything, they are making matters worse, in that way destroying the marine ecosystem at a far more rapid clip to boot. Unluckily, the vast majority of fish, even the wild caught, is too contaminated to eat on a daily basis. But, there are some exceptions – the best options for you would be to eat the ones that are not contaminated: wild Alaskan salmon, sardines, and anchovies.

It is not allowed to farm Alaskan salmon, so it is therefore always wild-caught. The second and the third – sardines and anchovies – are smaller fish that have short life cycles, which also seem to be better alternatives regarding fat content.

So, what we are supposed to do?

We should stop eating farmed fish at all costs. This is the only most effective thing which we can do to save our health and stop this industry from polluting the oceans and our environment. If we are decided to stop consuming the animal product and still resonate with eating fish, we should stick to Alaskan salmon, sardines, and anchovies, which we already mentioned.

Wild caught salmon can cost a lot, so sardines and anchovies can be a good enough alternative because of their nutritional value and level of sustainability. But, there are also some plant-based alternatives which can give our brain what it needs to function properly, without the risk of toxic contamination, and they include: walnuts, chia, hemp and flax seeds, brussels sprouts – just be sure to that they are organic.