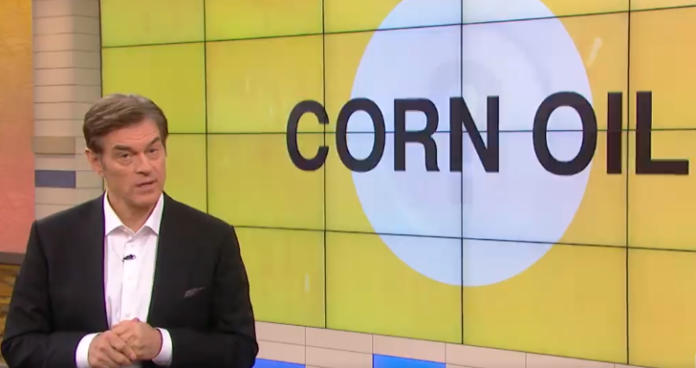 As arguably the most prominent and well known TV personality in the world of natural health, Dr. Mehmet Oz has gained a huge national following, promoting everything from natural weight loss supplements to healthy and unique foods.

Over the years he has even gained the trust of many in the organic and non-GMO food movement because of his powerful support for GMO labeling, a subject most other TV hosts and networks have never touched.

“Before You Cook Dinner Tonight, I Want You to Add One Key Ingredient…”

Speaking in a segment posted to his Facebook page on February 9, Dr. Oz touts the supposed health benefits of Mazola corn oil, from a company that knowingly uses and promotes GMOs on its website.

“Before you cook dinner tonight, I want you to add one key ingredient,” Dr. Oz says at the start of the segment. “It’s easy to find, it is highly versatile and it may help lower your cholesterol. I’m talking about corn oil,” he continues, just before the camera pans to a collection of stunned audience members.

What Dr. Oz fails to mention is that this particular type of oil is almost always a genetically engineered (and highly unnatural) product, one that is likely to be produced with considerable amounts of glyphosate, the main ingredient in the Roundup pesticide mixture that Monsanto and other companies engineer their corn to be resistant to in laboratories (which was declared to be a “probable human carcinogen” by the World Health Organization in 2015).

On the show, Dr. Oz promotes the corn oil from his “trusted sponsorship partner” Mazola as a healthy choice, but it wasn’t long ago that he was singing a different tune on these types of foods.

Dr. Oz and Corn Oil: An Odd Pairing in the World of “Healthy” Food

A little over three years ago, Dr. Oz invited activists and researchers onto his show during which he discussed GMO labeling, and also shared his concerns about the pesticide and GMO industry.

“I don’t feel confident as a scientist, a physician about what we’ve been getting ourselves into,” Dr. Oz said about the growing influence of the agrochemical industry in the U.S., while demonstrating how the controversial crops (like corn, of which over 90 percent in the U.S. is GMO) are designed to work by absorbing huge amounts of pesticides.

He urged Americans to contact their Congresspeople to save GMO labeling, calling the U.S. food policy a new “GMO pesticide arms race” because of its favoritism for industrialized, chemically-intensive food systems and new pesticide approvals.

Unfortunately for the countless thousands of people who backed Dr. Oz on this issue and praised him for his support on this widely ignored topic, his new partnership with Mazola flies directly in the face of his prior stance.

Mazola, his new advertising partner, states that its consumers “may have concerns” about GMOs in its products on its website, and includes information on how government health bodies have stated that the foods have been deemed “safe.”

But many consumers are skeptical of corn oil especially because of its GMO, and pesticide-intensive nature, as well as the ongoing debate about whether its industry-backed health claims are really all they’re cracked up to be.

Is Corn Oil Really as Healthy as the Industry Says?

While there are may be some “benefits” to corn oil in the right diet (considering the plant’s long history of being used in healthy Native American and Mexican cuisine), the above concerns cannot be overstated: American corn is over 90% GMO and is sprayed with heavy amounts of Roundup and other synthetic pesticides.

Corn oil is also high in Omega-6 fatty acids, which can be problematic in the context of any standard Western diet, where the Omega-6 to Omega-3 fatty acid ratio is extremely skewed toward the former to the detriment of human health.

To Dr. Oz and Mazola’s point, there was a study showing that corn oil is capable of lowering cholesterol much more than extra virgin olive oil, perhaps the most similarly used oil (other than canola) by home chefs. The plant sterols in corn oil may also potentially help to prevent rising LDL cholesterol by as much as 7% more.

But corn oil is also high in polyunsatured fat that may become rancid with high amounts of oxidation from heat, to add to the laundry list of concerns from its GMO status and the way such mass-produced corn products are typically grown with heavy pesticides.

The comments section on Dr. Oz’s Facebook page was far from kind to the popular doctor’s support for corn oil, with many viewers lashing out at his decision to promote the controversial substance.

“Shame shame shame on you Dr. OZ!!! You lost your integrity and a huge chunk of your audience with these deceitful corn oil promos,” read one popular comment.

“There is nothing healthy about corn oil!” another wrote.

“Corn oil has always been on the unhealthy list… how does it suddenly move? What has changed?” wrote another.

“Sorry almost all corn grown is GMO unless it says ORGANIC,” another commenter wrote.

The question now is whether or not Dr. Oz’s decision to promote a genetically engineered corn based product product will end up costing him viewers, and ultimately the trust of the die-hard fans that have helped make him one of the most popular daytime TV hosts in recent memory.

While Dr. Oz has earned some benefit of the doubt for his admirable stands in the past, and for all he’s done for the natural health movement, something doesn’t quite add up here.

Most of his true fans seem skeptical, as do the millions of people who’ve seen the benefits of cutting GMO polyunsatured fat-heavy foods like corn oil out their own diets for good. 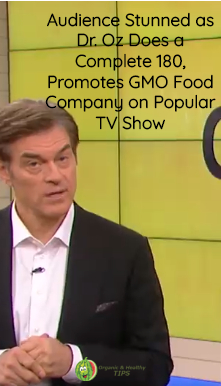