Many of us can not eat without bread as a staple in our daily diets. But are you aware of everything on the label and their effects on our heath?

Grocery stores are giving us a huge range of breads, that have a lot of promising healthy options full of goodness, grains and ‘all natural’ ingredients. But labels can be deceptive. Here are common ingredients found in many common breads.

1. HIGH FRUCTOSE CORN SYRUP
High fructose corn syrup has attracted a great deal of negative publicity and has been highlighted as a “food nasty” commonly found in many processed foods including desserts, candies, sodas and soft drinks, as well as some breads.

It is chemically similar to table sugar although it is much sweeter and cheaper making it attractive to manufacturers; however, the body processes high-fructose corn syrup differently than table sugar.

It undergoes a chemical process where the glucose and fructose, which are normally bound together, become separated. When these chemicals enter the blood stream, the fructose collects in the liver and starts a process called lipogenesis, which is basically fat production. ‘Fatty liver’ is currently one of the most prevalent diseases in the US today, with 90 million Americans estimated to be suffering from it. It is often a precursor to Type 2 diabetes. 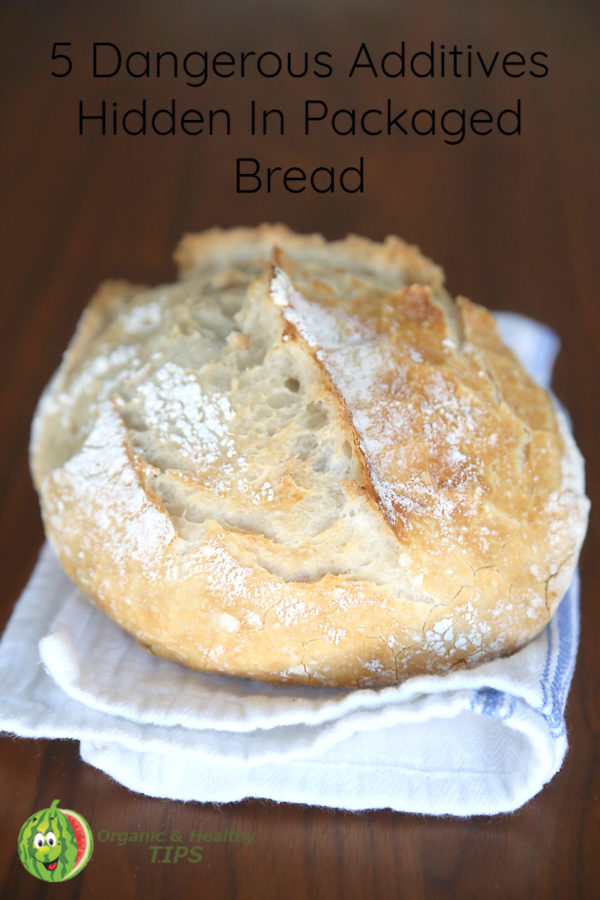 2. REFINED GRAINS
Highly processed refined grains are often in white breads in addition to white crackers and white rice. They are grains which have been stripped of all nutritional benefits by undergoing the refining process making them ‘whiter’.

The more refined the carbohydrate, the faster the glucose is released into your blood. This can cause peaks and drops in your blood sugar level and less stable energy levels in the body. These simple carbohydrates are linked to insulin resistance and high blood pressure which can lead to heart attacks.

3. POTASSIUM BROMATE
This is a common additive in commercial bread. It is used to strengthen the dough and to make the bread cook faster. Many countries around the world have already banned this substance in food production, including Canada, European Union, China, Brazil, South Korea and China. Research has shown a link between this additive and cancer of the kidney and thyroid (i).

4. L-CYSTEINE
This is an amino acid which also shortens the baking time of mass produced bread. It is usually derived from human hair, duck feathers and hog hair (ii).This is mostly produced in China by dissolving the hair or down in acid and shipped around the world as a bread softener.

5. AMMONIUM SULFATE
We all associate ammonia with strong household cleaning products. But were you aware it can also be found in bread? The FDA has deemed it safe at these small levels which are found in food products, but some concern has been raised as to the cumulative effects as many Americans eat bread on a daily basis. Ammonium sulphate has been linked with irritation to the gastrointestinal tract resulting in diarrhea and nausea.