Home Herbs Nine Herbs to Detox the Liver and Protect the Body From Toxins... 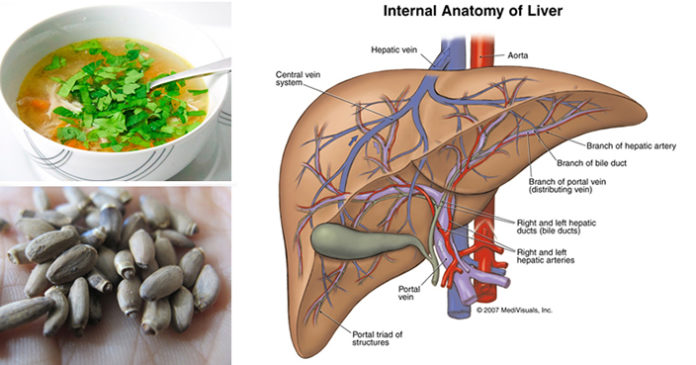 Think of a fish tank that has a motorized water filter. If the filter has been clogged with toxins from the tank, the entire tank is going to be filled with the same contaminants. In our system, the filter is the liver, the tank is the body, and the fish that has to live in it is you.

Thanks to a huge number of herbs that are capable for liver cleansing. But first, let’s examine the role of the liver in detoxification a bit further.

The liver is the primary organ responsible for expelling and breaking down toxins entering the body. In particular, it produces bile, a detoxifying agent metabolically indispensable in breaking down fats from food. Even many traditional medical doctors are fully aware of just how important the health of your liver plays in the outcome of your overall health.

Dr. Karl Maret, M.D. :
“The proper functioning of the eyes, the heart, the brain, the gonads, the joints, and the kidneys, are all dependent on good liver activity… If the liver is impaired from constructing even one of the thousands of enzyme systems the body requires, there is an impairment in overall body function and a resultant greater metabolic stress on the individual.”

There are many herbs that can help with liver cleansing. Here are the top 9 herbs I use and recommend:

Borotutu bark is by far one of the most powerful substances when it comes to liver cleansing and digestive system support. It has even shown promise in combating biliary colic, and jaundice. It’s also important to note that this herb contains powerful antioxidants which are known to help protect your liver cells from serious damage.

Milk thistle has been used for over two thousand years due to its remarkable effects on the liver and gallbladder. Galen and Pliny, the ancient philosophers recognized and used the power of milk thistle for liver cleansing and support. Milk thistle helps with the detoxification of poisons such as alcohol, regeneration of damaged liver tissue, stimulation of bile production, and improved digestion.

The indigenous people of the amazon have used chanca piedra for centuries to promote the body’s natural elimination of liver, gallbladder and kidney stones. It also stimulates the liver to purge itself of harmful toxins and foreign particles. Chanca piedra soothes the liver, increases bile production, and reduces the formation of calcified stones in the body.

The ancient greeks and romans considered celandine to be one of the most powerful liver cleansing herbs. Maurice Mességué the famous french herbalist used greater celandine for all liver problems. Celandine stimulates enzyme production from the pancreas, helps the liver eliminate foreign particles, stimulates the production of bile, helps relieve gallbladder spasms and improves a sluggish liver.

Known for its vibrant blue flowers, chicory is also a medicinal herb celebrated for its ability to help cleanse the liver. Ancient Roman, Persian, Arabian, and Indian physicians used chicory leaves and root to aid against a slew of liver ailments including jaundice, gallbladder and liver stones, urinary stones, constipation, indigestion, depression, and headaches.

This humble weed—often hacked to bits by lawn care workers—is a liver cleanser that has been celebrated throughout the ages. Dandelion root stimulates bile flow from the liver, and is often used by herbalists to help fight fatty liver, cirrhosis, estrogen dominance, and even acne.

This yellow root—a cousin of ginger—is a powerful liver protector and even liver cell regenerator. It not only helps stimulate enzymes responsible for flushing out toxins (including known carcinogens) from the body, but UCLA research found that turmeric is capable of combating the effects of carcinogens.

This herb is known as a blood purifier and commonly used to cleanse toxins from the body. Yellow dock helps break down fatty foods by stimulating bile production, enhancing normal liver detoxification, improving the flow of digestive juices, helping the liver eliminate toxins, and has mild diuretic effects to help flush out harmful substances. It also helps reduce irritation of the liver and digestive system.